What is South Africa doing with respect to the SDGs and how have they engaged business around this agenda? 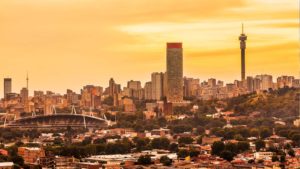 In 2012, South Africa issued the National Development Plan: Vision 2030 (NDP) as the country’s roadmap for social and economic development. The NDP aims to tackle deep-rooted socio-economic inequalities inherited from the oppressive Apartheid government system predating the democratic transition in 1994. While released three years ahead of the Sustainable Development Goals (SDGs), 92% of the NDP objectives map to the 169 SDG targets.

South Africa is committed to making its contribution to the SDGs, as they provide a framework for implementing and measuring progress towards the achievement of the objectives laid out in the NDP. In addition, the South African government has endorsed the African Union’s Agenda 63 and the Southern African Development Community’s (SADC) Regional Indicative Strategic Development Plan (RISDP). A national coordination mechanism for reporting on progress towards achieving these objectives in alignment with the NDP and the SDGs was set up – which will also help ensure that both national and international resources are deployed in the form of public sector finance and capacity building programs.

In July 2019, South Africa released its first Voluntary National Review (VNR) on the SDGs. The review was compiled by Statistics South Africa (Stats SA) and the Department of Planning, Monitoring and Evaluation (DMPE) located within the Presidency in collaboration with the local office of the United Nations Global Compact (UNGC).

South Africa has developed a strong implementation capacity on the SDGs relating directly to social welfare. Following the democratic transition, South Africa’s newly elected government prioritized the development and implementation of a range of social welfare systems linking closely with targets listed under SDGs 1, 2, 3 and 4, including a social grant system, a progressive tax system that exempts payment of VAT on staple food items, as well as free basic education and healthcare. 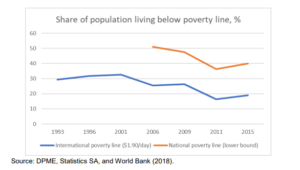 Data from national indicators show that, between 1994 and 2011, significant progress has been made in these areas. For instance, the share of people living below the international poverty line of US$1.90 a day fell from 29.3% in 1993 to 16.4% in 2011. Food security improved between 2002 and 2017 with the number of households vulnerable to hunger decreasing from 24.2% to 10.4% respectively. Access to basic resources such as water and electricity has been improved. The country also has the highest female representation at senior level in the public sector, with parity achieved in the current president’s cabinet.

However, an economic downturn has had significant effects on these positive trends in recent years. Many challenges that sit at the heart of the SDGs remain, including malnutrition, food insecurity, poverty, access to water and sanitation, as well as access to electricity. The situation is clearly exacerbated by climate change.

Policies aligning with the targets of SDGs 14 and 15 exist; however, implementation and data availability remain a key challenge when it comes to environmental protection, restoration and management.

Data compiled in the VNR highlights progress that has been made in relation to the NDP implementation and provides a baseline for progress on implementing the SDGs. Creating the VNR required facilitated partnerships with the private sector and other development partners to identify progress, challenges, opportunities, lessons learnt and next steps, including ways of collaborating to address the challenges going forward. The local branch of the UN Global Compact was instrumental in soliciting business contributions to the VNR and collating examples of company SDG initiatives.

At sector level, various government departments engage on working groups for the implementation of SDGs. For instance, the Department of Trade and Industry is participating in a strategic partnership with the EU-SA Strategic Partnership Dialogue Facility and the private sector through the Consumer Goods Council of South Africa to reduce and prevent food waste in South Africa- directly linking to SDG 12.

Stats SA is currently revising the SDGs Baseline and Indicator report that will provide a breakdown of the data per SDGs indicator over time. The current version of this report was completed in 2017 and is available here.

What are some of the key trends with regard to how business is engaging with the SDGs in South Africa?

There is a growing awareness among South Africa’s society, politics and business community of the country’s vulnerability to climate change. Both business and government recognize the links between climate change mitigation and adaptation and the implementation of the SDGs as the roadmap for the just transition towards a socially and environmentally sustainable economy.

Many companies have started internal processes to better understand the SDGs and their implications for business. Those that have implemented a thorough and rigorous process recognize that contributing to SDG implementation can enhance and stabilize the company’s operating context and unlock substantial economic opportunities and social value.

SDG principled prioritization and strategic integration are increasingly gaining traction. NBI is notably working with companies in the finance and agri-processing sectors in South Africa to collectively choose priority SDGs. The aim is to work together and identifying key focus areas for collaborative action for SDG implementation at scale in those sectors. 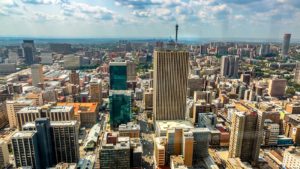 As main emerging trends, South African companies start off building the SDGs into their reporting frameworks and are gradually moving towards integrating them into their core business. Nedbank, Tiger Brands, and Distell, have for instance integrated the SDGs into their core strategies – using the SDGs as a lens to better assess and manage their risks and identify SDG related opportunities. They also have nominated SDG champions among their executive team to accelerate implementation.

What is NBI doing with respect to the SDGs?

The National Business Initiative (NBI) has adopted the Sustainable Development Goals (SDGs) as a strategic framework to guide work towards a sustainable and inclusive socio-economic transition for South Africa. The SDGs call for the participation of business in the development agenda and emphasize the need for partnership across the public and private sectors as well as between sectors of the economy and civil society.

It is central to our mandate to facilitate partnerships of this nature and the SDGs provide a tangible roadmap to drive conversations with companies about transition pathways.

Furthermore, we recognize that the SDGs are about opportunity. We have learned that this potential value can be unlocked in two ways:

We have developed a methodology to promote collaboration between sectors across NBI membership as well as, in collaboration with Confederation of Danish Industry (DI), to support individual companies to enhance their competitiveness.

This methodology is underpinned by the principles of the SDGs and provides guidance to business on how to prioritize and align their core business strategies to the SDGs to amplify their positive impact while reducing negative effects on environment and society and, importantly, to realize the potential opportunity offered by the SDGs.

We have piloted this methodology with the Banking Association of South Africa (BASA) and are currently running this process with companies in the Agri-processing sector.

In September 2018, we also held a national SDGs Roadshow in collaboration with DI to share our work and company best practice with companies and stakeholders in Durban, Cape Town and Johannesburg. DI also shared insight into how Danish companies are working with the SDGs as well as into their methodology for building them into core business. We plan on holding more workshops like this in future.

The work we have done, including a leadership video and several useful infographics can be found in the SDGs section of our NBI website.

How to find us