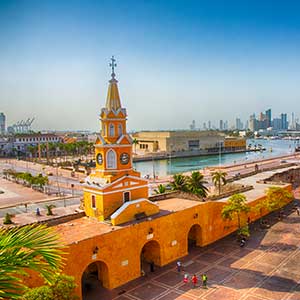 What is your country’s government doing with respect to the SDGs and how have they engaged business around this agenda?

Colombia played a leading role in the development of the 2030 Agenda and the SDGs. It was one of the first countries to incorporate the SDGs into the National Development Plan and one of the 22 countries that voluntarily disclosed results in 2016 for the first time.

Already in 2015, the Colombian government created the inter-institutional commission for SDGs with the mission of leading and coordinating the achievement of the SDGs. With help from the Swedish government, Colombia developed a virtual platform to capture and communicate SDG related developments in the country. Users can follow the 2030 Agenda for Colombia, learn how the goals have been adapted to the Colombian context, and find out more about measurement and follow up of each one.

With that understanding governmental institutions have called upon business with three specific actions to ensure they are part of the SDG implementation in Colombia:

In 2018, representatives from the public and private sectors developed a report about the business contributions to the SDGs in Colombia, titled “United for the SDGs: The contribution of our companies”. In this first edition, 19 leading companies released information about their management practices across 34 indicators that reflect their direct influence on 13 SDGs and indirectly on three SDGs over the last three years. the same year, the National Department of Planning published the document CONPES 3918 where the goals and strategies for the compliance with the 2030 Agenda were established for the country.

What are some of the key trends with regard to how business is engaging with the SDGs in your country?

Over the last few years, the trend has been for companies to incorporate the SDGs into their business strategy. According to the International Strategic Thinking Center, 75% of the companies in Colombia address the SDGs in their Sustainability Report, mention actions in favor of the goals and support this with indicators to measure and quantify the results.

This study also identifies that there are some SDGs that all sectors in Colombia act and report in their communication with stakeholders. Some include:

Another conclusion that could be drawn from the study was that the businesses in the primary and secondary economic sectors, which involve the extraction of natural resources and manufacturing tend to focus on environmental SDGs , while businesses from the tertiary sector, mainly involving products and services, focus on social SDGs.

What is your organization doing with respect to the SDGs?

In CECODES – Sustainable Development, we help our member companies evaluate, inform and focus their sustainability strategy and provide guidance to implement the SDGs. We promote platforms for Learning by Sharing where companies and our organization exchange experiences and insight and thereby enable peer-to-peer learning to help each other improve our respective SDG strategies.

We aim to deliver the following values to our members with respect to the SDGs:

In 2018, we supported the translation of the Good Life Goals into Spanish and throughout 2019 we will work on communicating the GLGs across all sectors of our society, looking for alliances and cooperation between civil society, media, and public and private sectors because we believe that all the action is critical for the achievement of the SDGs.

How to find us